Written by Maisie May Green

Maisie is a Senior Associate at The Early Careers Company. She joined the company in September 2021 as an Intern, after completing an undergraduate degree in Journalism Studies at The University of Sheffield. 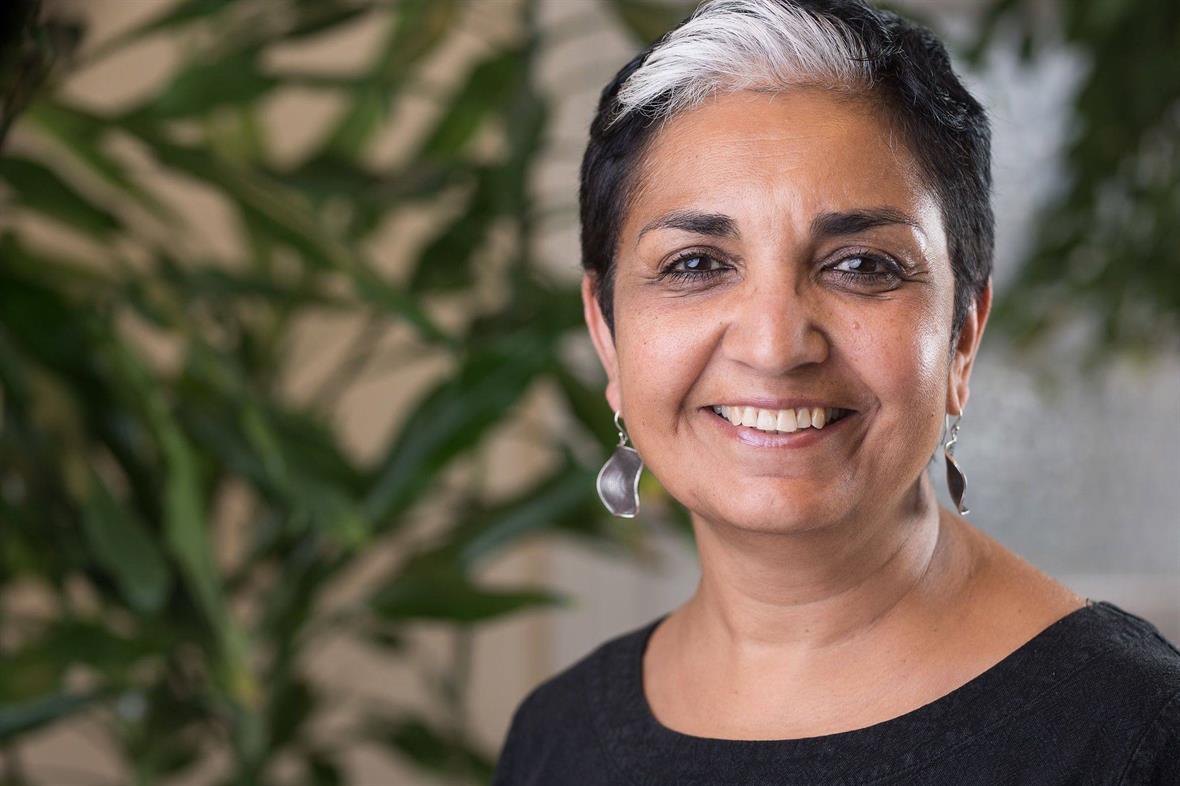 Arvinda Gohil is Chief Executive of Central YMCA, the first ever YMCA set up in 1844. Central YMCA provides programmes and support across England in education, training, health, and wellbeing. Arvinda has always worked in the not-for-profit and charitable sector. She began her career in the housing sector, with her first role running a women’s refuge that supported Black and Asian women in Leeds. Arvinda continued working in the housing sector as her career progressed, working across roles such as Membership Services Director at the National Housing Federation and Assistant Director for Regulation at the Housing Corporation. She also helped found Unity, a Black-led Housing association before moving to South Africa where she assisted in developing a social housing model.

Arvinda moved away from the housing industry to take on a different Chief Executive role at Community Links, a social action and advocacy charity based in East London and then at Emmaus UK. Prior to this, she also ran her own consultancy for five years, specialising in governance, leadership, and equalities.

As an experienced non-executive, Arvinda is currently Chair of The Peel, a charity that has been building a connected community in Clerkenwell since 1898. She is also a non-executive director of the Conduit, where she chairs the Impact Committee.

Maisie: Could you please start by giving us a rundown of what your current role is?

Arvinda Gohil: My main job is Chief Executive at the Central YMCA. The Central YMCA was the first YMCA to ever be set up, and it is now part of a global movement across the world. I’m also involved in a number of non-exec roles. I chair a charity in Clerkenwell, where I live in London, called The Peel, and I’ve been doing that for four years. I also sit on the board of a housing association, called Sanctuary, and I’m a non-executive of the Conduit Club, which is based in Soho.

Maisie: Awesome, lots of stuff keeping you busy – it all sounds amazing as well! What’s your day-to-day like in these roles?

AG: The central YMCA role is an executive role, so that’s where I spend quite a lot of my time. I’m the operational leader of the organisation. I spend my time supporting the board of trustees, my colleagues, my executive team, and making sure that we follow the strategy that we’ve agreed, and that we are financially strong as an organisation. It’s more of a conducting role, rather than an operational role.

Maisie: That sounds very interesting. So before this, what were you doing? What was your previous role? Was it in the corporate world?

AG: I have always worked in the not-for-profit sector, never in the private sector. That’s where I’ve always been since the beginning of my career. I’ve always done jobs that I feel have the potential to make a difference for people. The job I had just before this was running a charity in East London called Community Links.

Maisie: And how was that?

Maisie: We’d love to go back to how your career started. How did it all begin? What was your first job and how did you get it?

AG: Well, accidents. I didn’t go to university, I went to a polytechnic – I’m not sure whether you know what those are, but they used to exist a long time ago. When I was finishing up there, I didn’t know what I was going to do next. I got involved in student politics, and became a full time officer in the students’ union for a year. At the end of that, I still didn’t know what I was going to do. A colleague of mine who was also a full time official at the union, showed me a job advert, I applied for it, and I got it. The job was working for an organisation that was supporting Asian women living in abusive or violent situations. So that was my first job.

Maisie: I think the fact that you went through periods of uncertainty yourself is going to be something that people find reassuring to hear – I am sure that’s something a lot of people go through at the beginning of their career.

AG: I think it’s normal to not know what you’re going to end up doing. I think sometimes people try to over-engineer it and end up in the wrong track. Unless you absolutely know that you are going to be an aircraft engineer, or a nurse or a doctor – that’s not necessary. I didn’t have that – I was not sure what I was going to do. That’s how we started, and that’s how I got involved in the charity world really.

Maisie: So how did it then continue to progress? Were there any kind of major pivot points in your career?

AG: In some ways, I think I always knew that I was heading towards some kind of a leadership role, probably because of my personality and my ambition. I wanted to be in the driving seat for change, I wanted to make a difference. I think there were many pivotal points, but then again some of them were accidental. From my first job, I was on a track for working in housing. At the same time, I was on a track for creating equity – that was something I was particularly interested in, and I ended up doing a couple of roles around that as well. Then, in about 2000, I decided that I didn’t want to be in housing anymore, and wanted to move into the third, or social enterprise sector. That’s how I’ve ended up where I am.

Maisie: It must have taken some courage to take those steps to move from what you’re familiar with and go into a different sector. Do you recall any times when you had fears around your career and where it was going?

AG: There are lots of fears, always. People who say otherwise are just kidding themselves. I guess some people are just really good at hiding it. There’s always the unknown – you can never really know what’s coming your way. You get lots of rejections of course, and you have to be really resilient and really be prepared to keep going, so that you don’t let the failures phase you. They’re not failures anyway, they’re just learning points. There’s no such thing as a failure in my mind.

Maisie: I know you said that you always felt like you’d be in a leadership role in some way, did you ever think you’d end up where you are now? What did you envision right at the beginning of your career?

AG: I don’t really think like that – I never thought this was the job I was going to end up in. I just saw it as a job where I could have influence and the ability to create the change that I’ve been talking about. It had to be something that I felt very passionate about, something that would really drive me.

Maisie: Having that at the core of everything you do must be really great in steering your direction as well. This might be more of a tricky subject, but what were your biggest failures or biggest successes throughout your career?

AG: I’ve had lots of failures. All the leaders do. It’s part of the territory. And I’ve had lots of successes. The failures tend to be around maybe not reading things right, maybe not having the right people around you, or maybe not being in the right culture – that sort of thing. Of course I can tell you about a particular situation where I’ve failed, but I think it’s more important to understand why it happened. I think often it can be due to not having the support around you to be able to handle the challenges and work through them. A lot of leaders think that they have to solve everything themselves, but that’s where you start making mistakes.

Maisie: I guess taking that weight of responsibility and not asking for help can be a bad thing.

AG: I think it’s sometimes due to not having the people around you that you can ask this of, and not feeling confident about doing so. You have to remember that I am of a generation where women of colour were not really prominent in leadership roles. There was a kind of feeling where if you were to show that sort of vulnerability, you’d effectively be showing that you’re not up for the job. The impostor syndrome is something that is so readily talked about now, but in my day it was never really part of the conversation.

Maisie: Does anything come to mind when you think about the proudest moments that you’ve had throughout your career? Or maybe any regrets?

AG: Well, you know regrets are a very negative thought. I don’t like to have regrets, because they just take you down. They’re the root of negativity, and they never help. There are things that I would do differently if I had my time again, but I haven’t, so what’s the point? You have to use those opportunities to reflect on what happened and learn about yourself through it in order to do things differently next time. I coach lots of young leaders today, particularly women of colour who are in their first leadership roles, and that’s how I want them to approach it. Rather than saying ‘I failed at this’ or ‘I could have done this’, think about what you’ve learnt. Leadership is not something that finishes between the hours of 9 and 5. It’s just a way of being.

Maisie: What about your proudest moments?

AG: Lots of proud moments. I built a housing association from scratch to work primarily for the black communities. The fact that I went out to South Africa to try work on housing solutions. My current role, where I feel I have been very successful and actually very fortunate. You never know how it’s going to go.

Maisie: On reflection of that – what would your advice be to a 21-year-old Arvinda?

AG: The thing about getting older is that you wish you knew the things you do now when you were 21! But that’s impossible. I would say to myself – first of all, hang in there, you’ll get there. Secondly, don’t listen to people who won’t respect or recognise what you’re capable of. And thirdly, take the chances that are given to you, the opportunities that come – go for them.

Maisie: The career landscape has obviously changed a lot since you were 21. What would you tell people at that age now?

AG: It’s tough now in a really different way. But there’s lots of role models now that I never had – seek them out and learn from them, make friends with them. Reach out to them and say ‘can you help me?’. Don’t be shy about asking for help.

Maisie: That’s the perfect ending really. That was very inspiring – I feel lit up right now! Thank you so much for taking the time to speak to us.

AG: I am always available to help.

The posts you requested could not be found. Try changing your module settings or create some new posts.